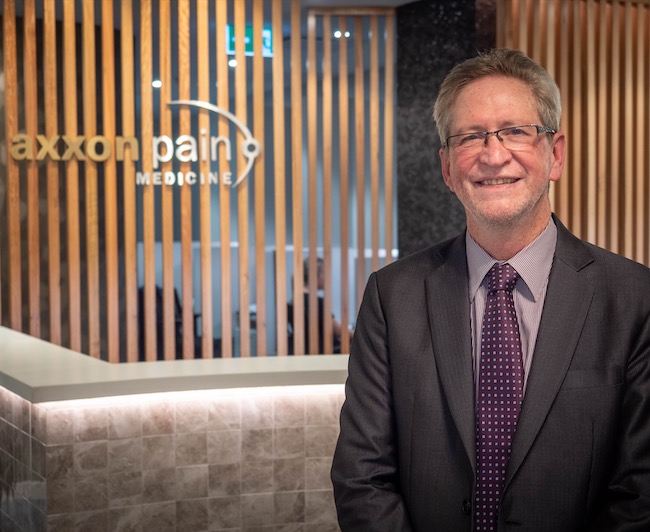 Dr James O’Callaghan is an esteemed pioneer and advocate of pain medicine and multidisciplinary pain management, in Queensland and throughout Australia. Having gained his fellowship of the Faculty of Anaesthetists, Royal Australia College of Surgeons in 1984, Dr O’Callaghan began his anaesthetic career at Townsville General Hospital. It was whilst there that he began collaborating with Professor Tess Cramond, Director of the Royal Brisbane Hospital Multidisciplinary Pain Clinic (later to become the Professor Tess Cramond Multidisciplinary Pain Clinic (PTCMPC)). In 1985 Dr O’Callaghan joined PTCMPC and Professor Cramond, who was from that early stage a significant mentor and inspiration for his significant work in Pain Medicine.

In 1986 Dr O’Callaghan worked at the Foothill Hospital in Calgary, Canada, before returning to PTCMPC and the University of Queensland. He continued there from 1987 until 1994, in the positions of Research Fellow, Clinical Lecturer and then Senior Lecturer attached to the pain clinic. This facility remains the preeminent pain centre in Queensland and Dr O’Callaghan’s contributions were pivotal in the development of the unit. He also assisted with propagation of the concept of multidisciplinary pain management throughout both the public and private sectors of medicine in Queensland. Dr O’Callaghan was a prolific clinical contributor, as well as a researcher and mentor during his time at Royal Brisbane and Women’s Hospital.

Dr James O’Callaghan has an extensive series of original publications in peer-reviewed journals within the field of pain medicine.

He has assisted as an examiner of University of Queensland Medical Students between 1988 and 1995 and was an international examiner for the University of Papua New Guinea for the Diploma of Anaesthesia between 1987 and 1989. He continues to contribute extensively to medical industry advisory bodies in the development of topical, practical and ethical educational material for wider use in the education primarily of general practitioners and allied health primary practice. Dr O’Callaghan has offered his expertise to help the wider medical community by serving on the patient and community services committee of the Queensland Cancer Fund from 1990 until 1994, representing Queensland on the Advanced Life Support Committee of the Australian Resuscitation Council from 1991 to 1995, and serving on the Medical Advisory Committee of Queensland Surf Life Saving from 1990 until 1999. He has also been chairman of the Queensland Government Therapeutic Opioid Drugs of Dependence Committee from 2001, a position he retains today, giving advice to medical practitioners treating problematic opioid use.

In 2014, Dr O’Callaghan received the “Distinguished Member Award” from the Australian Pain Society. He has pioneered interventional pain techniques in Queensland and has been performing advanced techniques such as radiofrequency neurotomy and spinal cord stimulation for over 30 years.

Dr O’Callaghan continues to be involved in teaching medical students, junior doctors, general practitioners and pain medicine trainees, the basic principles of managing chronic pain, the correct use of medications, and how to correctly perform interventional techniques for someone who is suffering severe chronic pain.

Dr James O’Callaghan remains a senior and respected Specialist Pain Medicine Physician in Queensland. His counsel is often sought and is universally available to assist trainees and new Fellows in pain medicine, in the transition to specialist practice. He is generous and supportive in his career advice, and has for many years been a very attentive confidant in times of anxiety and crisis for junior colleagues. Dr O’Callaghan’s contributions, professionalism and conduct of practice over three decades, optimise the values and spirit espoused by the Australian Pain Society.

Trust the team with over 20 years of experience caring for back pain.

Book A Consultation
What we do